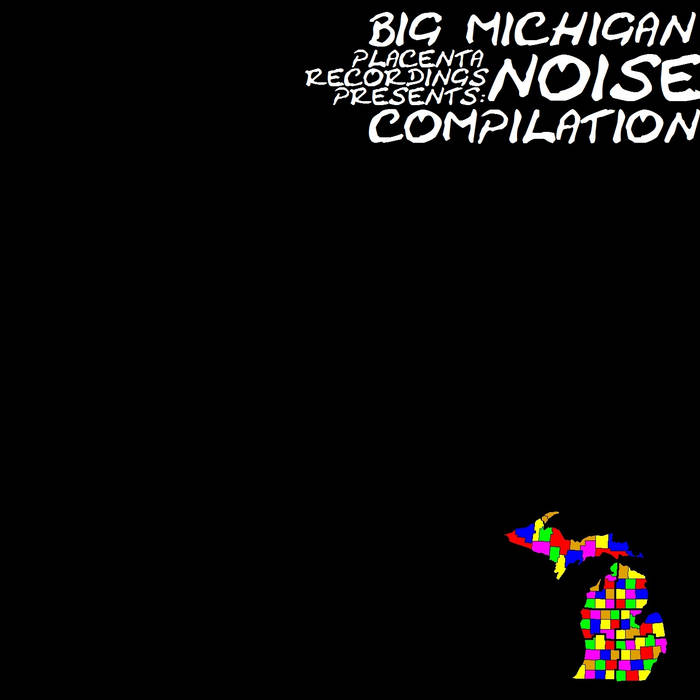 "Having grown up and lived in various cities and towns in the state of Michigan, I can honestly say it is one of the most fucked up states in the country...facing every issue imaginable, it reflects in the Noise music that comes from deep down in the pit of the souls of Michigan residents. This compilation shows appreciation for all of the oddball musicians and artists in Michigan who will never be booked back to the local watering hole ever again...This is for the outsiders who will never have their album available at FYE, and would never want it to be. This is for the girls/guys still running DIY spaces for us to play at, for the cats pressing 250 copies on vinyl for the sole fact they believe in the music, for the dudes dubbing tapes for the cassette label, the people cutting up tiny pieces of text and art making fliers and album covers...the people who make Noise possible in Michigan, defying odds and saying FUCK YOU to top 40 bullshit music and corporate influence on how you should live life...This music is not pretty, it's not for the faint of heart, and it's probably not for YOU." - Jay Watson (Placenta Recordings/Dental Work)

Organized by Jay Watson and Sean Barry 2015-2016. Released by Placenta Recordings 2016. Special thanks to Lob (Thee Instagon Foundation) who asked PR to handle the Michigan chapter of this series inspired by Hal McGee's "Big Florida Noise Compilation". Thank you to all of the artists who made this album possible!

This compilation was inspired by the BIG FLORIDA NOISE COMPILATION that was organized by Hal McGee.
(halmcgee.bandcamp.com/album/big-florida-noise-compilation)
..this inspired an even larger undertaking.. to attempt to generate noise compilations from EVERY state.. and the ONE NATION UNDER NOISE project was born (www.tif.org/ONUN.html)

"Noise music is a type of music that employs noise as a musical resource. It is generally created with nontraditional musical instruments such as static, feedback, electronics, circuit bent instruments, or any other noise source." - Google

"Noise music is a category of music that is characterized by the expressive use of noise within a musical context. This type of music tends to challenge the distinction that is made in conventional musical practices between musical and non-musical sound.[1] Noise music includes a wide range of musical styles and sound-based creative practices that feature noise as a primary aspect. It can feature acoustically or electronically generated noise, and both traditional and unconventional musical instruments. It may incorporate live machine sounds, non-musical vocal techniques, physically manipulated audio media, processed sound recordings, field recording, computer-generated noise, stochastic process, and other randomly produced electronic signals such as distortion, feedback, static, hiss and hum. There may also be emphasis on high volume levels and lengthy, continuous pieces." - Wikipedia

"Luigi Russolo, a Futurist artist of the very early 20th century, was perhaps the first noise artist." - The Art Of Noises

Bandcamp Daily  your guide to the world of Bandcamp

Featured sounds from Fly Lo and Ahmed Idris, plus Mother Nature hops on to drop off new project